I recently have moved, and was very excited to find out that my neighborhood has a pond in a common area available to the residents.

I took my daughter there for the first time this weekend, and we had a blast.

After running into troubles using her Barbie fishing rod, I switched over to my fly rod with a little spider tied on.

We caught a bunch of blue gill, and I left her reel in every single one.

It is too close not to get out there every once in a while and toss a few bugs on the water. 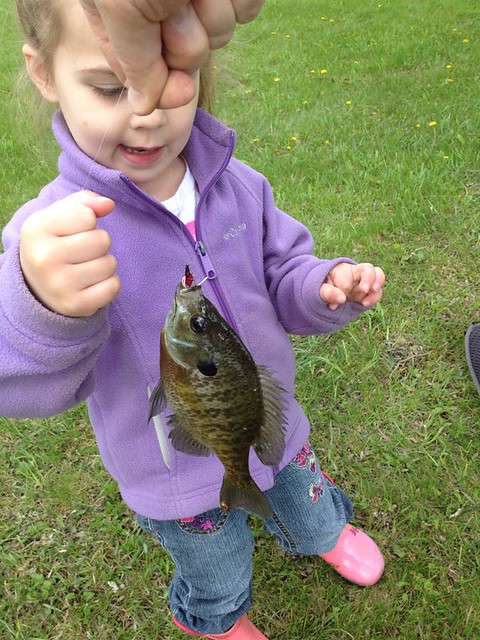 I’ve been following Robert Thompson a long time.  It all started for me back years ago when a member of a fishing forum online began posting trip reports that just blew you away with high quality photos.  Once the videos started to show up, that sealed the deal.  These were better than just trip reports.  I even once met him at the Midwest Fly Fishing Expo, and basically just let him know I was a fan of his work.

Eventually, his web site thirdyearflyfisher.com showed up along with monthly videos that could easily be described as short films.  These videos then evolved into an official film release, and now Robert Thompson has recently released his fourth film.

I had to write a blog post about The River because this movie is so amazingly good.  This film is not only good, but he released it on BluRay, and the additional high-definition imagery of hatches on the Au Sable combined with the clear water churning on the screen does nothing but make me want to load up my vehicle and head to the river.

Each of the movies he has created has been well worth the purchase, but I have to admit this fourth DVD/BluRay is a bargain for what is included.  The River is an entire documentary on the current state and history of the Au Sable River.  The Au Sable is the crown jewel of trout streams in Michigan (if not most of the country), and has a long history including providing the foundations for creating Trout Unlimited.  Along with The River, the DVD/BluRay contains two additional features.  First, a film involving three brothers fishing and reminiscing, with a focus on fishing for big browns on the Au Sable.  Secondly, a introspective film on Bob Summers, a landmark figure in fly fishing history that all started with his involvement of building bamboo rods under Paul H. Young.

Here is a link to his site: http://www.thirdyearflyfisher.com

Here is the trailer for The River: